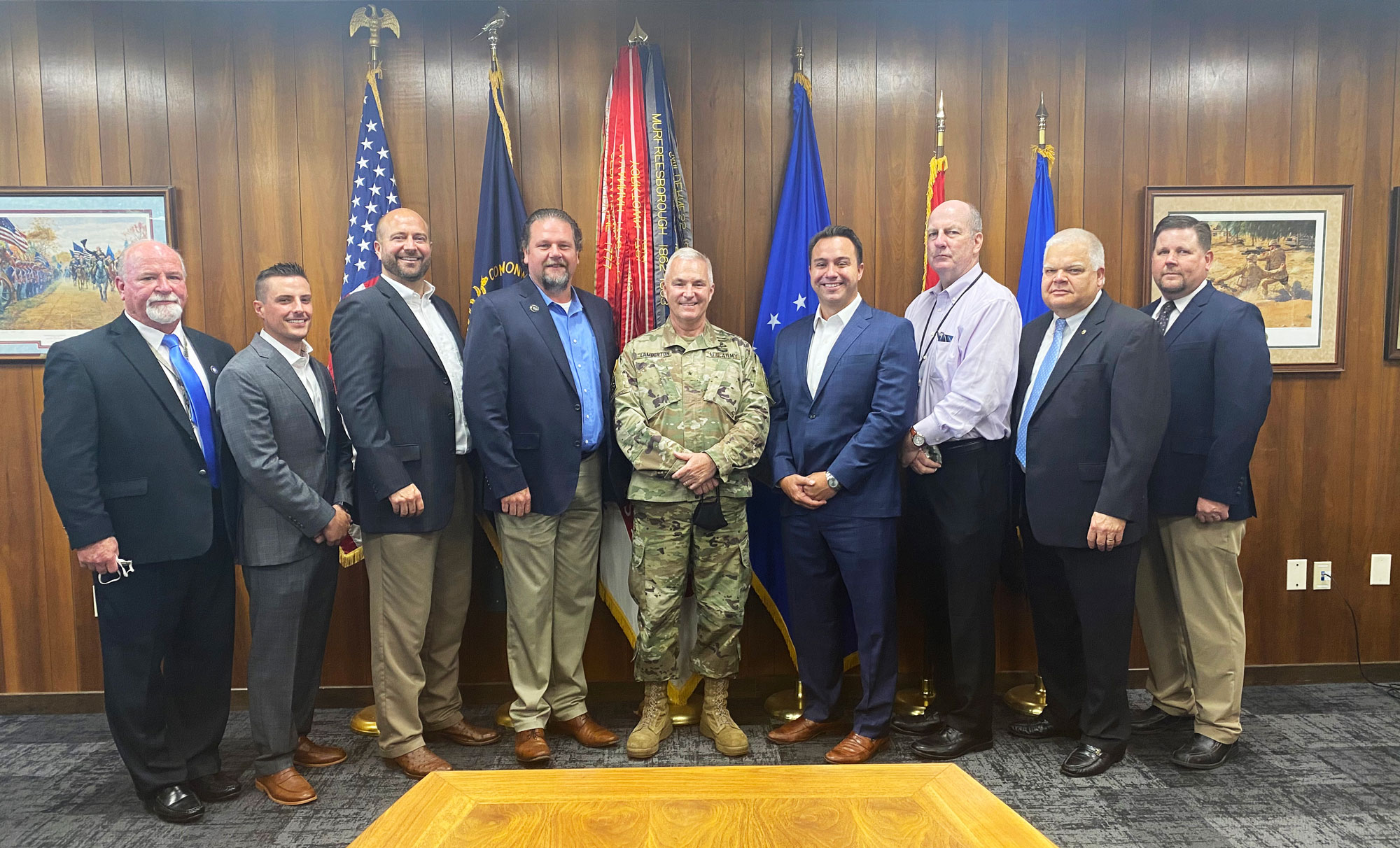 With an agreement signed today, the Kentucky National Guard announced its intention to build a regional readiness center and field maintenance shop on 18 acres at the new SPEDA Commerce Park.

The Kentucky National Guard is the park’s first official tenant. In exchange for the 18 acres where the facility will be built, the Department of Military Affairs (DMA) will transfer ownership of the 20,000-square-foot Armory building on Grande Avenue in downtown Somerset, as well as a 3,400-square-foot storage building, to the Somerset-Pulaski Economic Development Authority (SPEDA).

SPEDA has agreed to provide all utilities — sewer, water, electric and natural gas — to the property line of the commerce park parcel, and deeds for both properties will be transferred once funding is secured to build the Guard’s new facility.

The Guard currently occupies the Armory and will continue to do so through a lease with SPEDA until the readiness center is constructed and ready to move in.

Attending today’s ceremonial signing was Adjutant General of Kentucky Brig. Gen. Haldane B. Lamberton, the 53rd adjutant general for the Kentucky National Guard. Appointed by Gov. Andy Beshear in December 2019, Lamberton serves as the commanding general of both the Kentucky Army and Air National Guard and as executive director of the Department of Military Affairs, where he guides the preparation of 8,000 citizen-soldiers and airmen along with the Division of Emergency Management to respond in times of state and national emergency. He also oversees the development and coordination of all policies, plans and programs affecting Kentucky’s Army and Air National Guard members.

Today’s announcement fulfills a long-term construction goal for the Kentucky National Guard. The Adjutant General has put a high priority on building a new center in the Pulaski County area as well as a new field maintenance shop.

“Through nearly 75 years of service, our existing structures in Pulaski and Laurel counties have served us well. But as the facilities have aged, the Guard has outgrown the outdated structures,” Brig. Gen. Lamberton said. “We look forward to this new chapter at the regional SPEDA Commerce Park, the expanded capacity it will offer the Guard and the continued partnership with the Somerset-Pulaski community.”

A 142-acre development, SPEDA Commerce Park is located in the Pine Hill and Barnesburg Road area in eastern Pulaski County, adjacent to Ky. 80. SPEDA purchased the property in March from Pulaski County government, with the intention of recruiting tenants and constructing build-ready sites that will attract new industry to the community.

While SPEDA is exploring various options for use of the Armory, President and CEO Chris Girdler said the building will prove useful in helping prepare the community’s workforce for tomorrow’s challenges.

“Developing our workforce is crucial to economic growth,” Girdler said. “SPEDA has a significant interest in helping educate and train skilled employees and the Armory can help us greatly in this endeavor. We are so appreciative of the Kentucky National Guard and the Department of Military Affairs for their willingness to engage in this type of agreement, and their desire to grow in Pulaski County. In Pulaski County, and the region as a whole, we are a very patriotic community and it is an honor to be the headquarters of this new regional center.”