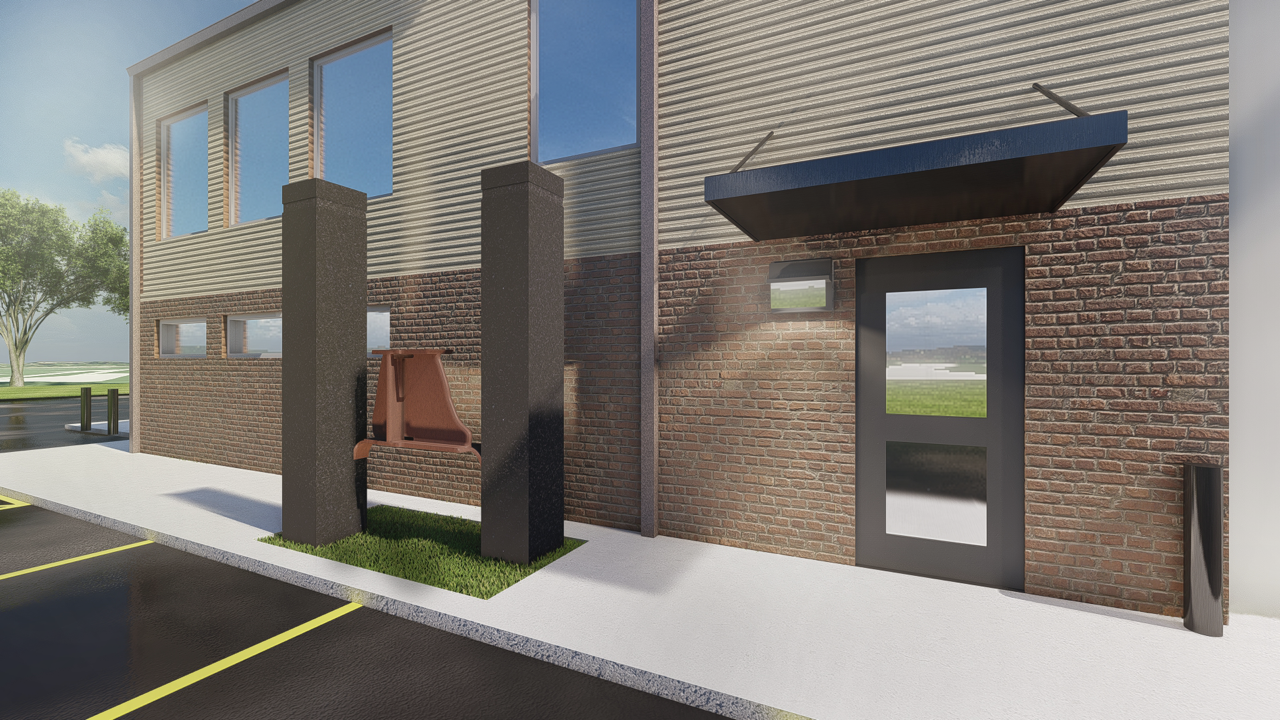 A piece of steel from the World Trade Center Twin Towers that was gifted to the Somerset-Pulaski County Special Response Team will be repurposed as a 9/11 Memorial outside the agency’s new headquarters — and the SPEDA Community Foundation is stepping up to help make it a reality.

The memorial will feature two black granite columns measuring 11 feet tall and 17 inches square — a proportional size to the Twin Towers when they stood in New York City — and will hold the piece of the north tower I-beam weighing 3,000 pounds between them.

The steel, which was donated to the SRT team following a year-long Port Authority of New York and New Jersey application and gifting process, is still considered property of the Port Authority and is required to be used as a public memorial. It was placed outside the SRT headquarters after being transported to Somerset and dedicated in 2011, and has been a staple of public remembrance ceremonies at the location since.

But a fire that extensively damaged SRT’s headquarters in April 2021 created the need to put the gifted steel in storage — and prompted SRT Chief Doug Baker and his team to consider a new way to memorialize this special piece of history.

“This steel is treated with dignity and we at SRT think of it as one of our own,” Baker said. “When the fire ravaged our building, we acted immediately to protect this important piece of our history and knew we wanted to do something to make its presence even more significant when we rebuilt.”

Because of the significant cost to construct a new memorial, Baker reached out to several community groups to seek support. SPEDA was ready to help, committing to raising money for the memorial through its 501(c)3 foundation. SPEDA President and CEO Chris Girdler said this is another way the organization can support law enforcement and first responders while also improving quality of life and enhancing economic development through public safety.

“Less than 1 percent of the remaining steel from the World Trade Center Twin Towers was allowed to be gifted after the 9/11 attacks, so to have a piece of history that is symbolic of an event so tragic yet so unifying for our country right here in Somerset is incredibly special,” SPEDA President and CEO Chris Girdler said. “That steel will always represent the sacrifice of so many of our first responders on that fateful day, as well as our country’s unwavering patriotism and pride. We were honored to support this endeavor.”

Somerset-Pulaski County’s I-beam is one of 21 pieces of steel in Kentucky that were gifted through the Port Authority program. After securing the proper permits and insurance to schedule a pickup, SRT personnel traveled to New York to bring home their piece of history. The steel was stored at Hanger 17 at John F. Kennedy International Airport — upon arriving, SRT members were also able to view artifacts like the north tower antenna and the FDNY ladder truck that was crushed during rescue efforts. These items, among others, can now be viewed at the 9/11 Memorial at Ground Zero, Baker said.

Somerset-Pulaski County’s steel was shrouded in an American flag for the return trip, and the same flag is used each year at the SRT’s 9/11 remembrance ceremony.

Baker said he is grateful for the community’s support to memorialize this piece of steel at SRT’s headquarters in a more prominent way. It has a significant impact on anyone who sees it in person, he said.

“We have had many responders visit us that worked The Pile (Ground Zero) as well as some of our own members, and each time we have someone who was there walk up and touch the steel, they always get emotional,” Baker said. “We greatly appreciate the support of SPEDA and so many others to help us make this memorial a reality, and we can’t wait to share it with the community.”

All donors will be recognized on-site with a bronze placard. A second bronze placard will tell the story of the gifted steel. A time capsule will also be placed on site with various special response service and military items.

SRT’s new headquarters will be dedicated in spring 2023. A 9/11 memorial dedication is expected in the following months once the installation is complete.

“Supporting the men and women in our community who sacrifice their lives to keep it safe is so important,” Girdler said. “We are excited to partner with SRT to raise funds for this memorial and encourage our residents and businesses to consider making a donation. It would be a wonderful way to show your patriotism and support for our law enforcement officers and first responders.”

For more information or to donate, call (606) 425-5409, e-mail jessica@speda.org or visit https://somersetkyleads.com/speda-community-foundation/.