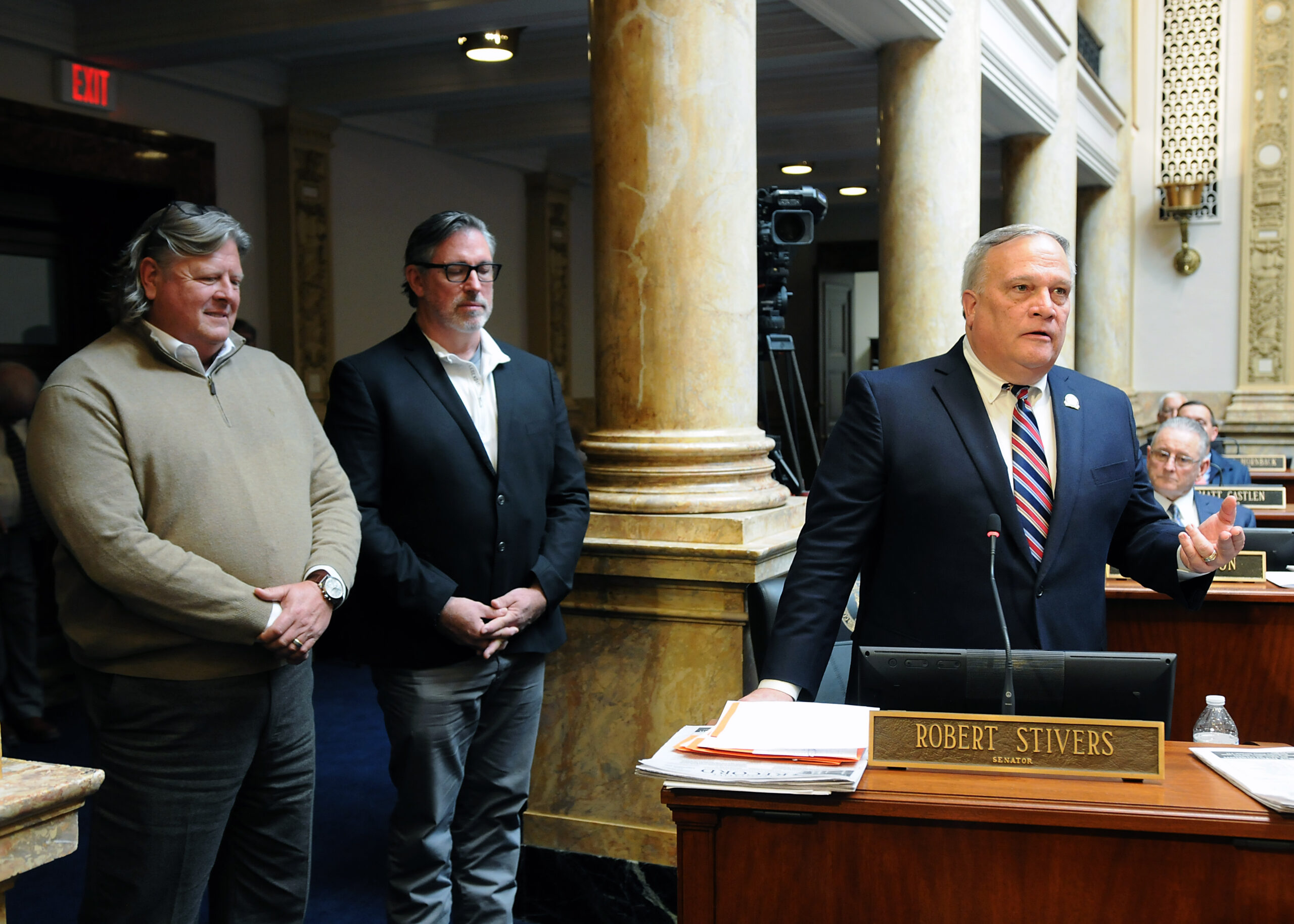 House, Senate commend the company’s founders for their military service and contributions to Kentucky’s economy

The Kentucky House and Senate issued citations during regular session Jan. 20 to Horse Soldier Bourbon founders John Koko and Scott Neil, honoring their military service after 9/11 and their commitment to build a $200-million distillery experience in Somerset-Pulaski County.

The citations offer Koko and Neil the General Assembly’s “sincere commendation and gratitude for both the sacrifices they have made in the interest of their fellow Americans and for their role in this vital new partnership.”

“These are extraordinary men for multiple reasons,” Senate President Robert Stivers said as he introduced Koko and Neil on the Senate floor. “One, the $200 million investment and creation of new jobs in south-central Kentucky and Pulaski County, and most importantly, their service to our nation as an elite group of men who fought and some of them that were lost in this reaction and response to 9/11.”

The Horse Soldier Bourbon team officially broke ground for its 225-acre distillery experience, Horse Soldier Farms, on Oct. 19, 2021 — the 20th anniversary of the day their hand-selected detachment of 12 Green Berets from the 5th Special Forces Group entered Afghanistan on horseback. Later named the “Horse Soldiers,” their clandestine mission marked the first time U.S. troops rode to war on horseback since World War II. The movie 12 Strong is based on their story.

Upon retiring from the military, the Horse Soldier team traveled the world and discovered a passion for making bourbon. They founded their ultra-premium, award-winning brand and determined their legacy would be to build a distillery in Kentucky. Working closely with Somerset-Pulaski Economic Development Authority (SPEDA) President and CEO Chris Girdler and Somerset Mayor Alan Keck — who were also present for the citations — Horse Soldier chose Somerset as the location of their distillery in 2019 and have designed a distillery experience that weaves together their love of country and craft.

In addition to honoring Koko and Neil for their selection of a community in his district, State Sen. Rick Girdler recognized SPEDA for its work in changing the economic development landscape in Somerset-Pulaski County.

“I applaud the Somerset-Pulaski County Economic Development [Authority], they worked hard to do this,” Girdler said. “This is one of several, but this is probably their biggest catch that we’ve had thus far. And maybe we’ll have more. But in this process, SPEDA has been very instrumental at this and causing this to happen in our county and I thank them for that.”

Horse Soldier Farms will bring 400-plus jobs to Somerset-Pulaski County. In addition to a sustainable distillery inspired by the Horse Soldiers, the grounds include a village that offers both spirits- and non-spirits-based activities. Events, festivals and concerts will fill the family-friendly venue’s schedule while shops, community rooms, a chapel and event center, and health and wellness opportunities will be available to residents, visitors and veterans. Horse Soldier Farms will also include a luxury lodge, cabins and serve as a premier culinary destination.

“We’re very proud of this group of men,” State Rep. Ken Upchurch said while introducing Koko and Neil in the House Chambers. “ … Hopefully in the next few years, you will be coming to Somerset, which will be the southernmost part of the bourbon trail and be able to tour their new facility.”

Koko expressed gratitude to House and Senate members for their thoughtful recognition of his company and his brothers-in-arms.

“As we continue our journey home to Kentucky, we are overwhelmed with the hospitality and generosity of the state’s leaders and community members in welcoming us,” Koko said. “Our service to our country brought us here, but our journey’s not over. Horse Soldier Farms is our legacy and we are so proud to continue our journey in Somerset, where we are going to make outstanding bourbon and continue to make history.”

About Horse Soldier Bourbon
Horse Soldier Bourbon is an Authentic, All-American, award-winning, ultra-premium bourbon brand and is hand-crafted with a true sense of mission, service and honor. It is available in three permanent expressions; Straight Bourbon Whiskey, Small Batch Bourbon Whiskey, and Barrel Strength Bourbon Whiskey and our Limited-Edition Series Commander’s Select. HSB is sold in stores across 17 U.S. states with plans to go nationwide. To learn more, visit www.HorseSoldierBourbon.com.