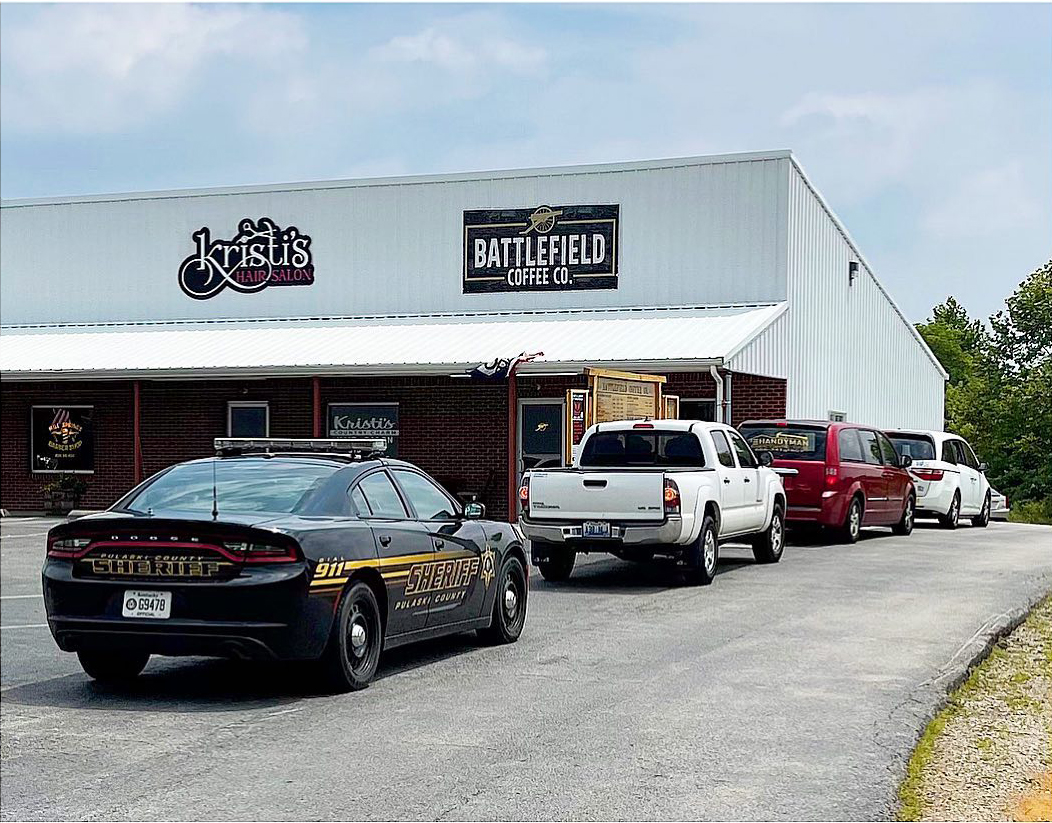 Battlefield Coffee's drive-thru intercom system was made possible by SPEDA's mini-grant program. The intercom improves the customer experience by moving the line through more quickly.

The 15-minute trip from Nancy to Somerset might not seem like much to the average driver. But if you’re making that trip four to five times a week just to get a cup of coffee, it might be time to reevaluate.

For most that probably means brewing more coffee at home. But for Phil Keeney and Dean Whitaker, two entrepreneurial-minded Pulaski Countians who enjoy a good cup of joe, it meant seizing an opportunity to brew coffee for their community.

“The whole business started because my partner, Dean Whitaker, had just moved to Nancy,” Keeney said. “We’d been friends for a while. We were in a parking lot hanging out one day, and he said, ‘You know what we really need in Nancy is a coffee shop. I hate to drive all the way to Somerset to get good coffee.’”

It was a light bulb moment for Keeney, who already owned a popular pizza joint in Nancy. There was an empty unit open in the plaza where Keeney’s Mill Springs Pizza is located, a building that is owned by his father. It would be just right for a coffee shop — and later, a Somerset-Pulaski Economic Development Authority (SPEDA) mini-grant to help the business serve more customers.

“I ended up going over and talking to him later that day, like, ‘Hey, how serious are you about that?’” Keeney said. “That’s kinda how it started, just out of necessity.”

Some of the most successful businesses fill a void in the market, and Keeney and Whitaker had found one: There were no places in Nancy to get a locally sourced cup of coffee. Opening a coffee shop was an opportunity to give that option to residents and visitors, and could well complement the booming tourism economy on the west Ky. 80 corridor.

So they started doing their research. Soon they had found a Kentucky-based coffee bean supplier who now provides three custom roasts for their venture, which they named Battlefield Coffee — a nod to nearby Mill Springs Battlefield and the community’s rich Civil War history.

“We knew we wanted to name it something local. As you know, Lake Cumberland and Mill Springs are kind of worn out,” Keeney said.

He threw out the Battlefield name not thinking it would be a possibility; surely another business had already taken that name. Turns out, it was available. And completely appropriate.

“Our building is literally sitting on the property where that fight (the Battle of Mill Springs) took place,” Keeney said.

Whitaker, who is a graphic designer by trade and owns Good Brothers Ink in Nancy, incorporated Battlefield Coffee’s now-signature cannon into the company’s branding. The Civil War theme is carried throughout the interior of the shop and on merchandise.

As they developed their brand and business plan, Keeney and Whitaker discovered another opportunity in the coffee market in Pulaski County: Sunday sales. A locally sourced cup of coffee was not available anywhere on Sundays until Battlefield Coffee opened.

“I’ve owned Mill Springs Pizza going on my seventh year and my father owned it for 25-plus years, so I kind of know that people take that Sunday drive, just from being in business out there for so long,” Keeney said.

Opening on Sundays was a good move. The store is not only busy on Sundays but throughout the weekend as a result of the traffic other local attractions bring to the area. People traveling to Lake Cumberland, Pulaski County Park, Haney’s Appledale Farm, Bear Wallow Farm and Mill Springs Battlefield Visitor Center & Museum are now buying a locally sourced cup of coffee in Nancy to fuel their visit.

Battlefield Coffee opened in March, and in addition to coffee and custom drinks offers a number of food items (the sausage balls are all the rage, a recipe Keeney adopted from his aunt who used to make them when he was young). Keeney and Whitaker give their baristas the freedom to be creative and try new recipes. That independence was rewarded in August when Battlefield Coffee won Specialty Drink of the Year at the Cold Brew Coffee Festival in Lexington.

It only took three months for word to spread about Battlefield Coffee and the drive-thru window to get crowded. Customers could drive up to the window to order but as the line grew, it became difficult for baristas to fill orders quickly. Having an intercom system would help alleviate this problem — baristas could get a few orders ahead and improve the customer experience.

Keeney had heard about the SPEDA mini-grant program and thought it would be a great avenue for funding this much-needed equipment. Keeney and Whitaker seized yet another opportunity and were successful in their proposal — thanks to their $2,500 mini-grant award, drive-thru customers can now order through an intercom system that Keeney said “levels up” the shop.

Having a resource like the mini-grant program is invaluable to new businesses, Keeney said.

“The first years are not exactly profitable,” he said. “You try to spend the money you do make putting it back into the business. But to have a resource like this is very helpful. I hope more businesses take advantage of an opportunity like this.”

Keeney and Whitaker should know. They can smell a good opportunity 15 minutes away.