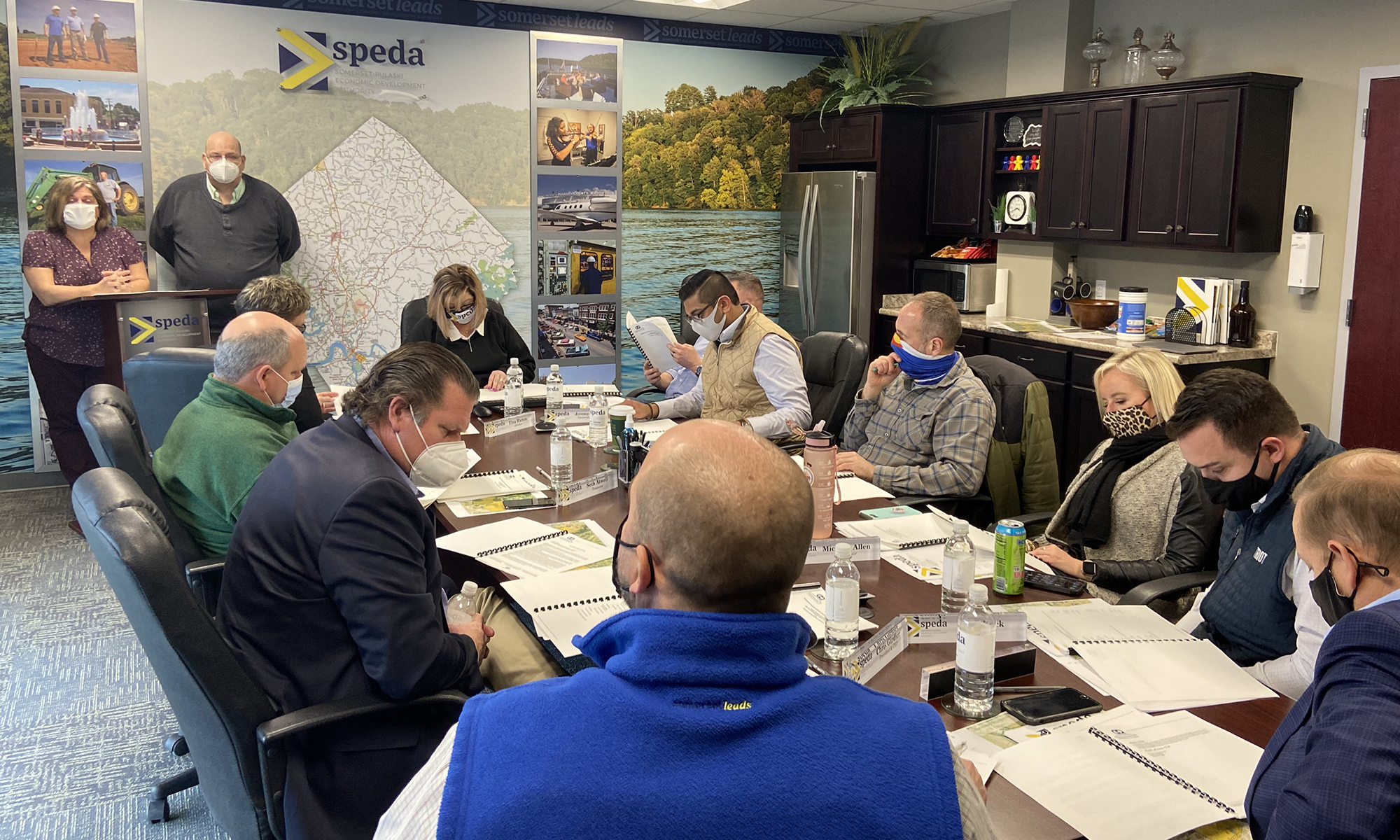 Madgel Miller, a partner with the London office of Cloyd & Associates PSC, presents final audit reports for fiscal years 2019 and 2020 to SPEDA board members Thursday.

The Somerset-Pulaski Economic Development Authority (SPEDA) has received two clean financial audits, independent examinations that were not required by law but instead pursued voluntarily by the organization.

Madgel Miller, a partner with the London office of Cloyd & Associates PSC, presented the final audit reports for fiscal years 2019 and 2020 — SPEDA’s first two years in operation — to board members Thursday at the organization’s monthly meeting. Both reports give a clean opinion, meaning, Miller said, that the accounting firm didn’t find anything while reviewing SPEDA’s records that would cause it to modify its opinion.

“And that’s what you look for,” Miller said. “That’s the highest level of opinion from a CPA.”

In reviewing both reports with the board — which outline SPEDA’s assets, liabilities, and net assets, as well as revenue and expenses  — Miller explained that SPEDA saw an increase in net assets of about $500,000 between 2019 and 2020, which is reflective of the growth the organization has experienced in its second year.

She complimented SPEDA’s staff on record-keeping and the organization’s board members for proper oversight and separation of duties.

“The bottom line is, you all have very good records,” Miller said. “The transparency, just coming in to do the audit, we were just given anything we needed, we didn’t have to ask for most of it just to be quite honest. It was right at our fingertips.”

Based on what the firm learned about SPEDA and the research performed, Miller said auditors were pleasantly surprised with how the money came in, was used, and recorded. “I appreciate that because as an auditor, it’s not fun when you come in and don’t have good records,” she said.

Miller said she also appreciates when her firm is asked to independently review records for an organization that isn’t legally required to do so. “We know it comes from the top, that you’re wanting transparency,” she said.

SPEDA President & CEO Chris Girdler said he pursued the audit because it promotes transparency and improves synergy within the community.

“Though SPEDA is not required by law to have an annual audit, we felt like it was the right thing to do, especially given the tumultuous state of financial affairs with the old economic development foundation,” Girdler said. “Transparency and fiscal responsibility are extremely important tenets of our organization and having an independent system of checks and balances is essential to upholding those values.”

Board treasurer Seth Atwell, a partner with Evans, Harville, Atwell CPAs in Somerset, told fellow board members that this is the highest level of assurance the organization can receive.

“I was very pleased that we received a clean audit, but it’s what I expected,” Atwell said, offering his thanks to Girdler and SPEDA Chief Accounting Officer Jessica Carlton for their diligence in proper record-keeping.

“We’re building this foundation today so that when we are all out of this and gone, this entity continues to thrive and can continue to build on that foundation,” Atwell told board members.

SPEDA Chairman Brook Ping said volunteering to bring in a third-party to evaluate the organization’s finances is another example of SPEDA’s bold leadership and collaborative spirit.

“As a lifelong citizen of Somerset and Pulaski County, I am honored to be part of an organization that chooses to do the right thing, the right way,” Ping said. “SPEDA is dynamically and positively changing the landscape of our community.”

Somerset Mayor Alan Keck made a motion based on Atwell’s recommendation for SPEDA to continue annual audits though not required by law, as it continues to set the tone for transparency. Pulaski County Judge-Executive Steve Kelley seconded the motion and it was approved unanimously. The board also voted unanimously to approve both audit reports.